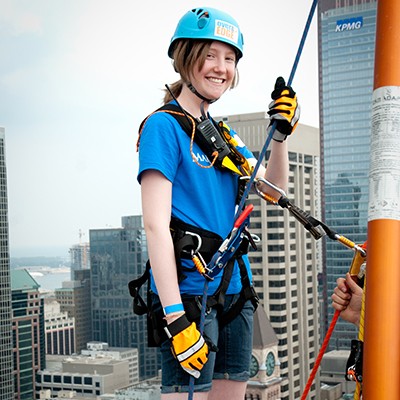 For Mariana, her wish to go on a cruise in 2013 was about more than simply having a dream fulfilled; it was a life-changing experience.

Born in Mexico, Mariana moved with her family to Canada as a young child. Learning English as a second language, she struggled to fit in due to the language barrier, and continued to feel like an outsider while growing up. When she was diagnosed with leukemia at the start of grade nine, it looked like Mariana’s teenage years were going to be just as atypical the rest of her childhood.

Finally, at the age of 17, and after three years of treatment, Make-A-Wish® sent Mariana and her family on a Caribbean cruise, which marked a turning point in her life. To summarize her experience, she says: “I love what they did for me. I love how they opened the doors for me to live my dreams and to try and be more than what I thought I could be before my wish.” Seeing the impact that Make-A-Wish had on the lives of so many children not only made Mariana feel special, it made her feel a part of a wider community; one that would change her way of thinking and the course of her life.

In May 2013, Mariana and her family departed for their cruise aboard Royal Caribbean’s Explorer of the Seas cruise liner. Mariana says that the idea for her wish was sparked by seeing the Oasis cruise liner on the Discovery channel, and marvelling at its size and luxury. Mariana felt this would be the perfect wish experience because she'd get to spend time with her whole family and celebrate the end of her cancer treatment. “Being on the cruise ship with my family was a memorable experience that kind of closed a chapter for us," she says. "I was so grateful that Make-A-Wish gave us this opportunity to get away and forget about all of the stress of being ill, and just enjoy being a normal family.”

Once aboard the ship, Mariana was excited not only by the scale of her adventure, but also by the fact that the ship’s staff was raising funds to support Make-A-Wish on their journey, in partnership with the wish granting organization. The cruise ship flew the Make-A-Wish flag during their time at sea, and Mariana was invited to participate in the fundraising activities.

Mariana recalls that when they reached $8,000 of their goal, she was invited to push the captain into the pool; when they reached $9,000, she was rewarded with throwing a pie at the captain’s face; by $10,000, Mariana was invited to dress up and visit the salon to shave one of the hosts’ heads! The spirit of camaraderie was amazing, and when the program raised more than $11,000, Mariana was invited to speak in front of the passengers. “In the end, everyone applauded my little speech and made me feel like a celebrity," she says. "I recall a couple of people pointing at me, and smiling or waving... I never told them that I had cancer, or that I was a Make-A-Wish child, but they all supported me nonetheless.” Mariana was amazed by the generosity of everyone aboard the ship, and she felt, for the first time, strong, confident and able to take on the world.

In the years following her wish experience, Mariana has become a dedicated supporter of Make-A-Wish. She has participated in our signature fundraising event, Rope for Hope for the past three years. She also works for Camp Oochigeas as a photographer/videographer/video editor. “Speaking in front of an audience has given me the courage to really want to be a spokesperson for Make-A-Wish and other cancer organizations,” she says.

Mariana is now cancer-free and attends Brock University, where she is completing her third year of study in the creative writing honours program. She hopes to become a fantasy novelist and write stories that people living with cancer can connect with. She wants to help people in treatment cope with what is happening to them, so that they can feel happy and accepted.

Mariana cannot overemphasize how important the work done by Make-A-Wish can be for a family dealing with a childhood illness. "Supporting Make-A-Wish is a way to invest in giving a child an opportunity to be happy or giving a family the chance to find hope in a time when it is really difficult," Mariana says. "Life-and-death situations are never easy, but having a wish will allow that family to feel special."

More than anything, the experience has made Mariana believe that she can help others facing the same difficulties, whether through her writing or through the newfound confidence that has allowed her to stand up and speak publicly on behalf of those in need, “It might have been a small wish, but I got to see how many lives Make-A-Wish has impacted by granting them their one true wish," she says. "So just being a part of that community made me feel really special and helped me see that we are really making a difference.”

For Mariana, it’s all been about paying it forward.