Joe Hittel Goes Above and Beyond for Wish Kids 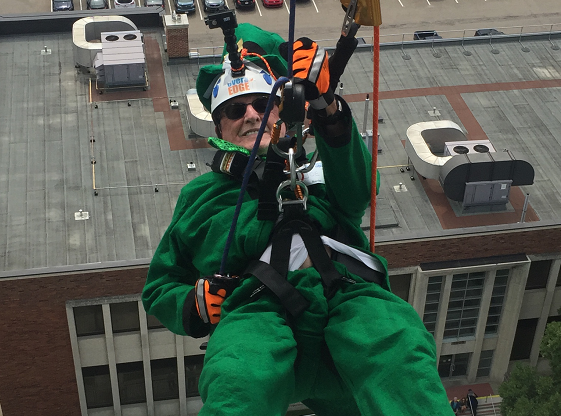 Make-A-Wish® Rope for Hope is Make-A-Wish® Canada’s national signature fundraising event that calls on participants to fundraise a minimum of $1,500 in exchange for the thrilling opportunity to scale down the side of an iconic city building. Joe Hittel, an 83-year-old man from Red Deer, Alberta, was inspired after seeing rappellers at a 2017 Rope for Hope event and was determined to participate in 2018.
Hittel rappelled at his local event in Red Deer, and became the event’s top fundraiser, raising more than $14,000 to help grant wishes in his region.

This is what Joe shared with us about his Rope for Hope experience and his motivation to give back to his community.

“I have eight children, 14 grandchildren and 14 great-grandchildren. I know how important family is and what an organization like Make-A-Wish means to sick children and their families.

Watching the community come together at last year’s Rope for Hope event was so inspiring. I knew I had to join in, so I signed up for the following year’s event in Red Deer and started fundraising.

I had to raise at least $1,500 to rappel, but I wanted to raise more than that – a lot more than that. Raising money was my biggest challenge. One day, I met a father whose child had a wish granted by Make-A-Wish. Listening to his family’s story was a humbling experience and motivated me to achieve my goal.

I went from business-to-business asking for any donation they could give. Some people couldn’t give money, so they offered free merchandise instead. I collected the donated merchandise and organized a silent auction that raised over $4,000.

As it came closer to the event day, I was overwhelmed by the amount of support I received from my community. I was a couple of weeks away from the event and I had collected just over $12,500. I knew I still wanted to raise more and continued to go door-to-door asking for donations up until the night before the event. Ultimately, I raised more than $14,000 for Make-A-Wish Northern Alberta.

On event day, I wasn’t nervous about rappelling down the Stantec building. I thought about the wish kids and what they have to go through on a daily basis and used that as motivation to get down. It can be a nerve-racking experience for some, but I really wanted to have fun with it and stand out. So, I decided to rappel in a leprechaun costume. It was such an amazing experience and I would encourage everyone to try this event at least once.

I am happy that I raised a lot of money in support of Make-A-Wish. My goal in 2019, is to be the top Rope for Hope fundraiser in Canada.

On behalf of Make-A-Wish Canada, we thank Joe and all of our Rope for Hope fundraisers who gather their courage to help create life-changing wishes for children with critical illnesses across the country.