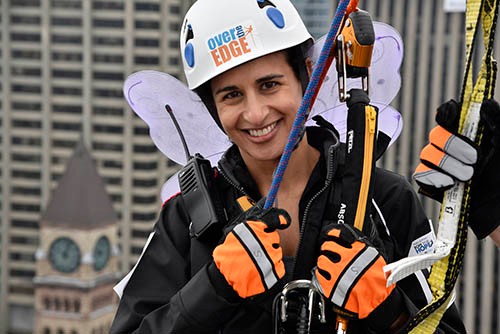 Make-A-Wish® Toronto & Central Ontario helped grant the wish of a four-year-old boy suffering from a congenital heart condition. At that time, no one realized the ripple effect this gesture would have on an entire community.

Owen wished to be a firefighter just like his grandfather had been. When Central York Fire Services fire captain, Shaun Mitchell, met Owen the connection was instantaneous. Shaun escorted Owen on his wish day, picking him up in a real fire truck, outfitting him with his own uniform and training him like a real firefighter. Shaun’s wife, Shalini, also accompanied her husband on the wish, in an effort to learn more about Make-A-Wish® and our work to grant wishes for kids with critical illnesses. Shalini had recently had a baby boy and felt especially connected to a mission that supports children like Owen.

After the wish was completed — the Mitchell family stayed in touch with Owen’s family and became friends with his parents. That summer, Shaun and Owen’s father, Brian, formed a fundraising team called ‘Team Owen’s Heart’ and recruited family and friends to join them for the inaugural Make-A-Wish® Rope for Hope event in Toronto.

In the fall of 2014, the Mitchells attended the launch of The Mighty O! — a children’s book released about Owen and his life-changing wish. Shalini was still looking for ways to become involved with Make-A-Wish and our organization began recruiting a volunteer committee to support Rope for Hope, with a specific focus on securing sponsorships to elevate the event. Keeping Shalini’s skills and experience in marketing and communications in mind, Make-A-Wish Toronto & Central Ontario invited her to join the committee, which she did with enthusiasm — this was her chance to make a big difference.

That’s how Shalini first entered the world of Make-A-Wish volunteers. In fact, not only did she work her internal network, reaching out for donations and support, she also signed up to rappel at the 2015 Rope for Hope event. Shalini was able to secure donations for her rappel and also built a team of 14 enthusiastic women, to form ‘Team Women Wish Granters’.

“We built a team with incredible female camaraderie, despite our busy schedules. I made new friends, reconnected with old ones and learned so much along the way. I am so grateful to Make-A-Wish for this opportunity that brought us all together.”

Team Women Wish Granters has gone on to become one of the top fundraising teams in the history of Rope for Hope Toronto, raising an outstanding $30,000 in their first year alone.

Owen’s wish continues to inspire the Mitchells and the teams they’ve built as a result of that one incredible day in April 2012.