Our first event will be hosted by Colin Asuncion on Instagram Live. Join us to meet wish kid Olivia and learn to make Colin’s delicious mixed berry shortcake! 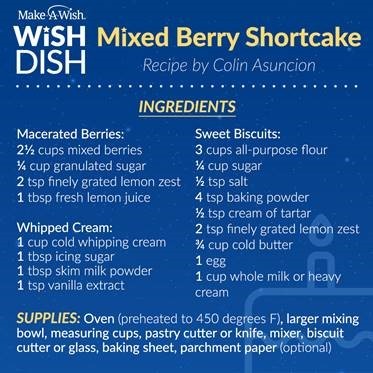 Colin Asuncion is Toronto’s beloved finalist from Season 3 of The Great Canadian Baking Show (CBC, Netflix Canada). In addition to his work in the kitchen, Colin is a seasoned performer and theatre artist. He recently performed alongside Jully Black and Divine Brown at Koerner Hall (UnCovered, Musical Stage Company) and in the play Box 4901 at Buddies in Bad Times Theatre. Colin was also a guest commentator on the final season of MTV Canada’s The After Show hosted by Dan Levy and Jessi Cruikshank. His original music is available on Spotify, Apple Music, Google Play, and Amazon Music.